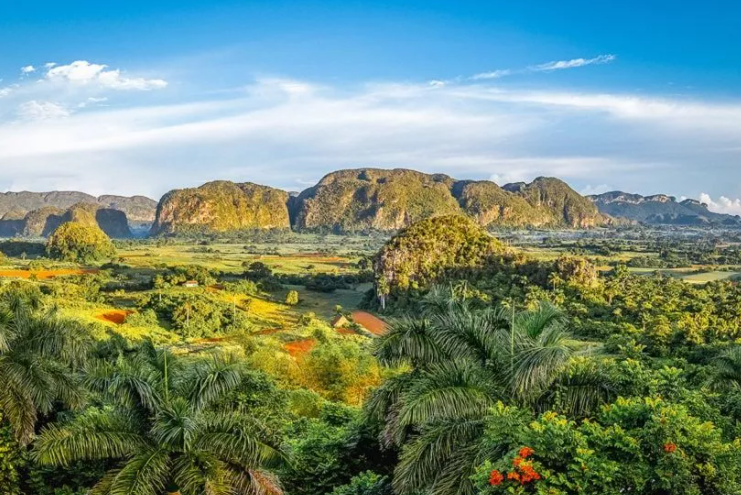 Riding through endless fields of green tobacco and fertile red soil in Viñales, we passed local farmers harvesting the leaves that would become Cuba’s world-famous cigars.

Viñales is a small town located on the Western tip of Cuba. Set in a beautiful lush valley with funky looking hills and limestone caves, people have been growing tobacco in the area for over 200 years.

We were traveling in Cuba on a 10 day adventure, and hired Jose and his sweet red 1957 Ford Victoria to drive the four of us 3 hours from Havana to Viñales, passing a handful of other classic cars and horse-drawn carriages on Cuba’s poorly maintained highways.

While there are some hotels in town, most travelers stay with locals in casas particulares, which are like guest bedrooms in other people’s homes.

Our host was Lay, a welcoming lady who turned her home into a guesthouse with two double rooms. This is how many Cubans make extra income beyond their communist government regulated salary of about $30 USD per month.

The town has plenty of small restaurants and bars with live music, but it doesn’t feel overcrowded. In fact, Viñales is rumored to be Fidel Castro’s favorite part of Cuba!

The valley was formed underwater, rising from the sea millions of years ago. Ancient ocean fossils can still be found in the caves that dot the landscape.

The New York Times called Viñales one of the top places to visit.

But aside from being a beautiful travel destination, Viñales is known for the quality of its tobacco. I’m not a “smoker” per se, but I do enjoy the occasional cigar at the end of a big trek or for special occasions.

So I was excited to learn how Cuba’s world-famous cigars are actually made.

How To Make Cuban Cigars

Why are Cuban cigars so special? Well, many people believe Cuba is the birthplace of cigars. Christopher Columbus encountered native Cubans smoking cylindrical bundles of twisted tobacco leaves in 1492.

The practice was eventually exported to Europe, and by the 19th century, smoking cigars became a popular pastime for wealthy men — who formed special cigar clubs called divans.

Cuba’s time-honored tobacco growing and production techniques were exported to places like the Dominican Republic and Nicaragua. Then came the United States trade embargo, making Cuban cigars illegal — and increasing their value even more.

The fertile land and favorable climate of Viñales make for perfect cigar tobacco growing conditions. Most residents here are in the tobacco farming business.

We hired a local guide from our guesthouse to take a horseback ride tour of Viñales National Park, learning about the traditional techniques used here for hundreds of years.

No machines are used in the tobacco growing process, which means crops are picked by hand and fields are plowed with oxen.

Passing through farms with pigs, chickens, and turkeys, we rode along green tobacco fields where local workers were harvesting the last of the season’s prized leaves. Tobacco grows fast, ready for harvest after 2-3 months.

The leaves are then hung in special curing barns, where they dry for about a month, turning a toasty brown color. The Cuban government buys 90% of the tobacco, while locals are allowed to keep 10% for themselves.

To prepare Cuban cigars, the center vein of the leaf is removed, where 98% of the nicotine resides. Next, leaves are sprayed with a special mixture of ingredients like pineapple, lemon, honey, cinnamon, vanilla, and rum for the fermentation process.

Three different types of leaves are used to roll the final cigar — filler (inside), binder (holding it together), and the wrapper (visually appealing outer layer).

Other Adventures In Viñales

Visiting tobacco farms isn’t the only thing to do in Viñales though. As part of the farm tour, we also explored one of the many limestone caves in the area. Rock climbing these unique limestone formations is a popular activity too.

Aside from guided horseback riding, you can also rent a bicycle, ATV, or motorcycle and explore the valley on your own. There’s a popular cave called Cueva del Indio where you can ride a boat on the underground river that flows through the cave.

We heard stories about a nice little beach about an hour North of Viñales called Cayo Jutías, but didn’t have time to visit.

Make sure to stop by the massive Viñales Mural de la Prehistoria, this colorful work of art was created by Leovigildo González Morillo. In it, he portrays world history from the age of dinosaurs up to the arrival of humans.

Viñales is located about 3-4 hours West of Havana. A regular Viazul Bus runs twice a day for about $15 USD per person. Try to buy your ticket a day in advance.

Or you can do what we did, and rent a vintage taxi from Havana to Vinales with room for 4 people for about $60-$70 depending on your bargaining skills.

The final option is booking a full day-trip tour that includes round-trip transportation from Havana.

Where To Stay In Vinales

My suggestions for great places to stay during your trip to Vinales, Cuba. You can always book a horseback riding tour directly from your guesthouse like we did from Hostal Casa Lay, where we stayed.